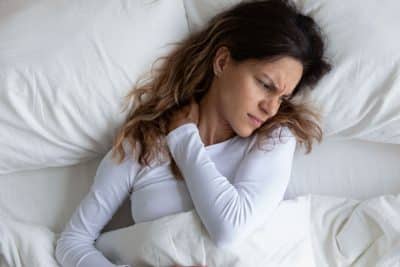 If you’ve ever had a bad night’s sleep, you know it can affect the whole next day’s productivity, your mood, and your overall health. If you don’t sleep well on a regular basis, then you may be at your wit’s end wondering if you’ll ever catch the Zzzz’s you need to feel well. Sleep disturbances in some form affect millions of Americans, but there are solutions to bad sleep other than over-the-counter or prescription sleep aids.

One factor that is very important in fixing your sleep problems is knowing what’s causing your restless sleep. Your bad sleep may be anxiety-related, or it may be physical. Your sleep problem may be as simple as needing to eliminate caffeine in the afternoon or exercising more. Or it may be a bit more complicated. You may have a medical condition like sleep apnea, or you may have a dental issue like temporomandibular joint disorder, known commonly as TMJ or TMD.

The good news is that sleep disturbances resulting from sleep apnea or TMD are treatable.New York City TMJ dentists are utilizing a number of treatment modalities that don’t involve surgery or prescription drugs. If you’re struggling to sleep in Columbus Circle, help is only a phone call away.

What, Exactly, is Sleep Apnea?

While there are three types of sleep apnea, obstructive sleep apnea (OSA) is, by far, the most common. For our purposes today, OSA will be the main focus. Obstructive sleep apnea occurs when the airway becomes obstructed while you sleep. The airway becomes obstructed when the tissues in your airway collapse. When oxygen is cut off, the brain alerts the heart to keep beating, but the sleeping person will gasp or choke for breath since the collapsed tissue has blocked the airway and eventually awaken briefly.

The cessation of sleeping may occur hundreds of times per night. If you stop sleeping for ten seconds or more at a time and awaken the next day feeling tired, there’s a very good chance you have OSA. It’s uncommon that people become fully awake during a sleep apnea episode, so many people don’t even know they have OSA.

If you’ve been told you snore, you may have sleep apnea because snoring and sleep apnea are closely linked. You’ll be amazed to learn how dangerous undiagnosed sleep apnea can be; sleep apnea will not only make for a miserable day following poor sleep, it may wreak havoc on your general health. The dangers of sleep apnea are numerous and include:

These serious medical conditions are the main reasons that sleep apnea treatment should be sought if you suspect you have it.

Another issue that is closely linked to obstructive sleep apnea is TMJ.

What, Exactly, is TMJ?

Temporomandibular joint disorder is a painful condition that results from a problem with the alignment of your jaw. If your bite does not align properly in a resting position, you may have TMJ. A misaligned bite is medically known as “malocclusion” and may result in a number of painful symptoms that may seem unrelated:

Disorders of the TMJ affect not only the joints themselves but also the surrounding muscles and ligaments. The temporomandibular joints are located on each side of the face, right in front of your ears. If your teeth are misaligned, and you suffer from TMJ, you will likely experience one or more of the above symptoms. After a Columbus Circle TMJ dentist properly diagnoses your TMD, a treatment plan can be created.

Now that you know what sleep apnea and TMD are, you may be wondering how they’re linked. TMJ and sleep apnea are often diagnosed separately and treated separately, but when one New York City TMD dentist is treating you, the rate of treatment success will skyrocket.

Get Sleep Apnea and TMJ Treatment in Columbus Circle

If you’re tired of being tired and are ready to take the steps necessary to get a proper diagnosis and begin treatment, then please call Appolon Dental Group in Columbus Circle, NYC (212) 557-8668. You can also send a message via the online contact form, and one of our dental team members will reach out shortly to find out how we can help. You can even book your own appointment on the Appolon Dental Group website.